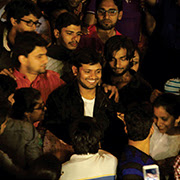 It is highly shameful that certain sections of the "Student" and "Academicians", openly held an event
in the JawaharLal Nehru University (JNU ) campus, against the hanging of parliament attack convict
Afzal Guru.  The student organisers of the event, pasted posters across the JNU campus, inviting the students together for a protest march against "judicial killing of Afzal Guru and Maqbool Bhatt ". The anti- social elements, shamefully misused the democracy and even shouted anti-India slogans and " Pakistan zindabad" to show their so called solidarity with "Struggle of Kashmir people for their democratic right to self- determination"

It is very important for us to retrospect, as to how such anti national element gets support from across the  borders. India is trying to improve its relations with Pakistan and neighboring countries and there seems to be a sincere attempt from the other side also. However there are several international conspirators, who need to be identified , who are against the peace process and create one unrest or the other. Stern and tough action is required to be taken against enemies of India . The real culprit may not only be Kanhaiya Kumar and his team but also the real people behind the show. Every Indian, including all political parties needs to support stern action. Even the left parties and Congress need to rise to the occasion and sideline the terrorist elements. It is important to kill any tendency to misuse the democracy by international enemies of India.
Posted by aicas at Monday, February 15, 2016